Last week I travelled up to (a surprisingly sunny!) Lancaster to have a bit of a catch up with Issy, go to a wedding, and for a little walk down memory lane. The two of us originally met whilst studying at Lancaster University, and Issy now lives there… so it holds a special place in our hearts. Unfortunately as most small cities go, quite a lot of the main town has changed since I left, so we felt we should spend a couple of days running around to some of our favourite places in Lancaster (new & old) to document them before they disappeared from existence! Cue Issy and Ang’s attempt at travel and tourism. We started our Thursday with coffee at Priory Hall, or ‘The Hall’ to those more well acquainted – a lovely new cafe on China Street that’s now just over a year old.

From syphon coffee and lever espresso to live music and Lindy Hop workshops, the venue is definitely much more than your average coffee shop! Not to mention, the cakes. Oh, the cakes. With a bakery connected to the cafe (yup, you read that correctly), freshly baked goods are placed onto the shelves every morning! Their tea and coffee is also supplied by local specialists, J. Atkinson & Co., who have been supplying the good people of Lancaster with their tea and coffee since 1837! As well as The Hall they also have another quirky cafe called The Music Room… which will probably feature in a future Lancaster post, or let’s not lie… one of our Instagram’s. 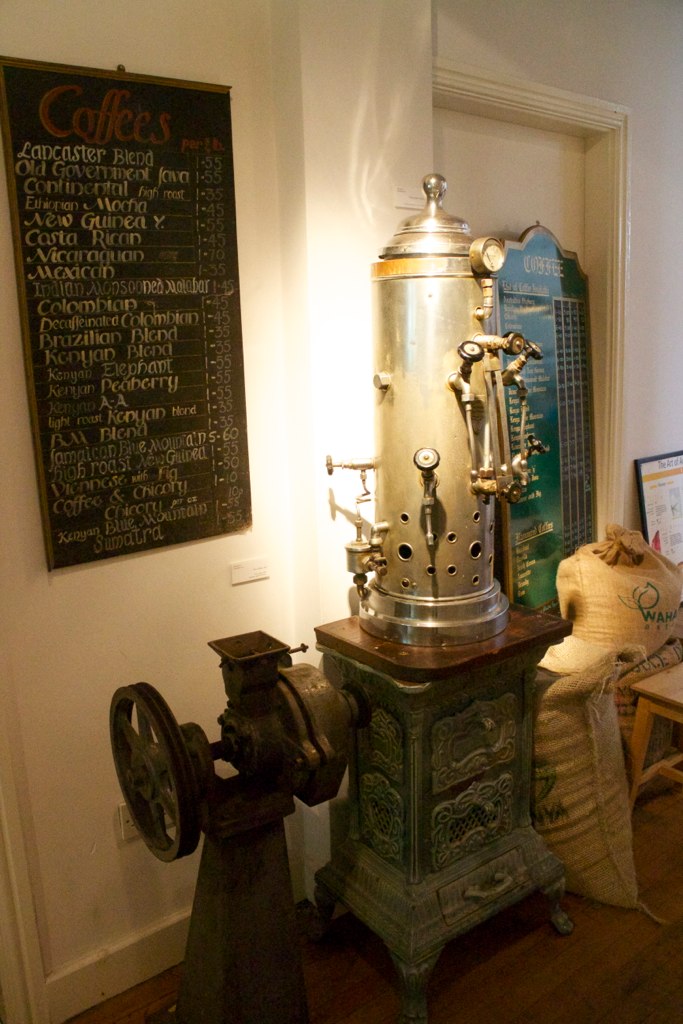 With so much history we just had to stop by the J. Atkinson retailer next door, which is filled with some beautiful tea and coffee artefacts.

Just look at that wall of tea canisters!

Coffee’d up, we then made our way to Lancaster Castle. Thought to have been built by the Romans almost a 1000 years back, the building has seen many incidents of religious persecution, the trials of the ‘Lancashire Witches’ and a fair few executions over the years. Up until 2011, the castle was actually used as a prison, but now the building is open to the public for tours, and other special events.

Yup, was definitely a prison.

We then decided to grab a pasty from The Cornish Bakery on Penny Street… because well, it’s a must. Whether sweet or savoury, eat in or take away… my Uni friends and I will always come back to this place when we visit Lancaster!

Armed with a Traditional Cornish, we made our way to Ashton Memorial for a scenic stroll in Williamson Park.

The place is absolutely gorgeous, with enchanting woodland walks, fountains, a butterfly house, the Lancaster sundial, and some breathtaking views… all the way to Morecambe Bay and the Lake District! The park also plays as a stage to the annual summer play performed by The Duke’s (a playhouse in Lancaster, will get to that later :P), where the audience follows the actors around the park from scene to scene. Whilst maybe usually aimed at a slightly younger audience, this year the play looks to be the story of Hansel & Gretel… which i’m very interested to see!

The park also most notably holds host to Ashton Memorial – a beautiful building constructed by millionaire industrialist James Williamson (Baron Ashton) in memory of his second wife. So kind of like the Taj Mahal of Lancaster. Yeah, I said it. The space is now used as a venue for concerts and wedding ceremonies.

Heading back to town we stopped over in The Dukes on Moor Lane for a cup of tea, being one of Issy and I’s absolute favourite places in Lancaster. The theatre serves as a venue for numerous plays (whether their own, the Lancaster Uni Theatre Group, or external companies), as well as hosting arts festivals, and screening films as an independent cinema.

Whilst at uni, it became a bit of a tradition for Issy and I to come here for the obscure artsy films, armed with an obligatory bottle of carrot and orange juice from the convenience store up the road, and to split a slice of whatever cake they were selling on the day. The relaxed, friendly atmosphere, and the ability to carry your pint into the screen with you creates such a homily vibe to the place.

Then it got to dinner time, so we walked just a little bit down the road (when you’re hungry, you’re hungry!) to a fairly newish restaurant called the Red Peppercorn. This wasn’t around whilst we were at uni, but since then Issy has raved about their fusion style of cuisine… in particular about their puffed rice salad! Oh it was good… you can see more on that in our next post!

Suitably fed, we decided to make one last stop for a drink at The Sun on Church Street. This hotel/bar has an impressively wide selection of cask ales and wines, absolutely DELICIOUS food, and such a lovely atmosphere… it’s one of our obvious favourites as we come every time I visit!

These were just a handful of our favourite places in Lancaster, but there are so many more awesome places that we wanted to visit (more specific to when we were both students)… so that will definitely be on our list of things to do next visit!